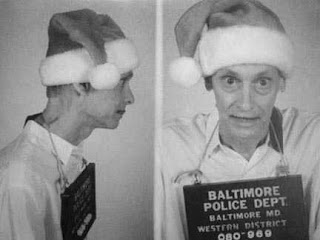 Stars: 5 of 5.
Running Time: Approx. 65 minutes.
Notable Cast or Crew: John Waters.
Best one-liner: "Let's talk about the Easter Bunny...I hate the fucker. What sex is the Easter Bunny? You know, you see the Easter Bunny in malls, not that many people do it. You can tell they don't even care, because they don't even clean the outfits, they have mold on them, they don't even send them to the cleaners. It's some poor woman, usually, another step backwards for feminism, because...the Easter Bunny is the ultimate bottom, really. And not a good bottom. Not a greedy bottom, not a bossy bottom, but an impotent, powerless bottom that no childhood hero could ever top. And Easter is an S&M holiday, anyway..."


I'm a Halloween guy. Thus, I'm pretty resistant to all things Christmas, and especially resistant to people who adore all things Christmas. My general stance on the holiday is that only Michael Ironside should be allowed to dress up as Santa and only Wham! should be allowed to release Christmas albums. (I would also permit Bruce Willis to release one, should he decide to revisit the whole RETURN OF BRUNO concept.) I suppose I also embrace the slew of action movies (TRANCERS, RENT-A-COP, LETHAL WEAPON, DIE HARD, KISS KISS BANG BANG, et al.) that use Christmas as a piffling backdrop for Gary Busey putting Mel Gibson in a headlock or Burt Reynolds using "Merry Christmas" as a one-liner or, shit, even William Powell drinking like forty-seven martinis and punching out his wife (ostensibly, in order to save her). Regardless, I shall now update my stance– John Waters is permitted to enjoy the holiday.

His kitschy selections of off-the-beaten-path carols (from Fat Daddy to Little Cindy to Alvin and the Chipmunks) have yielded a well-known compilation album entitled A JOHN WATERS CHRISTMAS. He has an accompanying monologue show as well, one that I had heard of, but had never been lucky enough to attend until this year. The man is endlessly entertaining and full of this lively, benevolently perverse energy- you can't help but to have a bemused grin on your face the instant he comes on stage- before he's even said anything. And as soon as he begins, hold on tight– he delivers a whirlwind of relentless anecdotes, wisecracks, ruminations, and obsessions- which, for me, rival (if not eclipse) canonical masters of the art form like Spalding Gray.

He recalls, as a child, how he wanted to sit on William Castle's lap instead of Santa Claus'; the juvenile thrill of breaking in and opening strangers' presents; his deviant zest for Alvin and the Chipmunks (including, but not limited to, him wearing Alvin's giant "A"-emblazoned hoody to a theater full of children attending a CHIPMUNKS screening); his extreme loathing of gift cards and the people who give them; his deep-rooted hatred of the Easter Bunny as a holiday mascot (see above); and his desire to have his own amusement park and freak show and 'abortion movie' film festival (he wants to wear costumes and shout out dialogue for 4 MONTHS, THREE WEEKS, AND 2 DAYS). He recounted fond memories of Divine; spoke of his hopes for a possibly upcoming HAIRSPRAY 2 and his own long-anticipated Christmas movie, FRUITCAKE; and made many obscure self-references to a crowd whom I doubt had even heard of, much less seen, films like MULTIPLE MANIACS or ROMAN CANDLES. In short, this thing is fantastic. (And I've hardly even scratched the surface.) Five stars. The fact that John Waters is my new best bud did not cloud the judgment of this review.