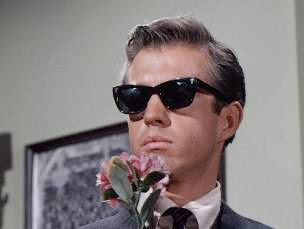 This one hurts. Clu first came to my attention as "Lee" in Don Siegel's THE KILLERS, where his vicious calm and truly inspired acting choices made such an impression that I was compelled to seek out as many of his films as I could get my hands on.

First, it was the easiest ones to find––like THE RETURN OF THE LIVING DEAD, THE LAST PICTURE SHOW, A NIGHTMARE ON ELM STREET 2: FREDDY'S REVENGE, WINNING, or MCQ; and then it was the rarities––staying up late to catch IRONSIDE, WALKER, TEXAS RANGER, and MURDER, SHE WROTE reruns, or buying old dog-eared videocassettes of WONDERLAND COVE/a.k.a. STICKIN' TOGETHER and THE WILLIES and HUNTER'S BLOOD and THE INITIATION. Recently, I'd been overjoyed to see him reaching new audiences with bit parts in Sean Baker's TANGERINE and Tarantino's ONCE UPON A TIME IN HOLLYWOOD.

His work is magnificent, no matter the context; in turns it can be morbid, melancholy, rugged, or hilarious. I saw him sow deep, satisfying empathy across a rogues' gallery of murderers, abusers (THE GAMBLER, among others!), and perverts (TAPEHEADS, among others!). There's his wonderfully macabre work with his departed wife Miriam Byrd-Nethery in FROM A WHISPER TO A SCREAM, creating a very human monster who bleeds pathos and induces in the viewer something approaching a somber state of agony. In each role he is intensely connected achieves a shocking level of intimacy; in each role he captures something that is true. Even in the films where he given nearly nothing to work with, like COMPANY OF KILLERS.

Then, I discovered Clu as a filmmaker. I saw the haunting and poetic A DAY WITH THE BOYS (available on the Criterion edition of GEORGE WASHINGTON and nominated for the short film Palm d'Or at Cannes), a film that wrests the viewer from reality and into a dream-space, one that's frightening and powerful. I saw several of the shorts he collaborated on with his family for their legendary acting workshops, read about the struggles of FUCKING TULSA (an incomplete film I dearly hope to have the opportunity to see one day), and got many kick from his son John Gulager's lovably demented horror features from the past decade (which are truly Gulager family affairs––films like the FEAST trilogy and PIRANHA 3DD). The entire family's work is infused with a fearless Grand Guignol sensibility and an infectiously gleeful streak of sadism, but it grapples with something larger and darker and more mysterious. In their incredible story, I see the anguish of life's stumbling blocks and I see the joy of what compels human beings to create. Clu and his family are soldiers of cinema, in the Herzogian sense.

PS–– For more context, I also highly recommend this piece about the Gulager clan (Clu, his wife Miram Byrd-Nethery (R.I.P.), his sons Tom and John, and daughter-in-law Diane Ayala) which first appeared in L.A. Weekly in 1997.

RIP Clu, your legend will not be forgotten.

Just like Xanadu... because we just lost Olivia Newton John too!

Yeah, it's been a rough week.

If it helps... Realm Kast just recently interviewed the wonderful Daniel Bernhardt and asked him about Bloodsport 4, his response is priceless from 16:30!

Ha, wow, that is pretty spectacular! Not the only time BLOODSPORT 4 has inspired a genuine spit-take.